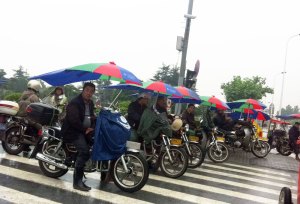 This doesn’t seem like it’s going to work very well.

Culture shock is a term that is often used casually, but it’s a very real issue when traveling internationally. You can experience culture shock in any distant location, but there are three factors that I’ve found increase its effect dramatically. These three factors are:

I have traveled to Europe, Mexico and French Canada, but Asia is the only destination that I’ve visited where all three are a significant challenge. The trip I took with a customer and colleague last June sent us to China, Hong Kong, Macau and Taiwan. Not only did we spend a week and a half in Asia, but we also experienced 4 cultures, 4 governments, 4 currencies and 4 languages.

During the trip, I dealt with a low level of culture shock, but my colleague was hit with it pretty hard. It’s not as if his personality changed or he freaked out or anything, but his level of comfort was reduced and he wasn’t able to enjoy some of the neat activities that were presented to us.  He preferred to go from the businesses we visited straight back to the hotel until the next day’s visit. No matter how much we encouraged him to get out, he was happier hidden away.

Since I felt enough culture shock to understand and respect it, but kept it from altering my trip, I thought I’d offer some suggestions for dealing with it.

Language
There’s very little you can do to help adjust to a different language, aside from learning it. More than issues communicating, it’s unsettling to be surrounded by hundreds of people constantly speaking another language. Especially one like Chinese that sounds nothing like English. That can make you feel out of place as quickly as anything. 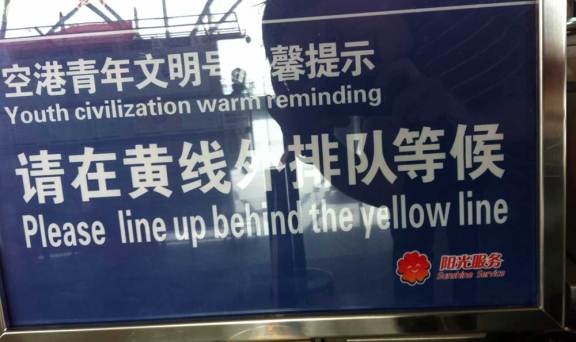 “Youth civilization warm reminding” – Americans aren’t the only one’s who struggle with foreign languages. This sign was at the Shanghai Airport as you go through customs.

After a few days in China, I learned that it is dangerous to learn only a few words and try to use them. For example, I was in a mall in Ningbo and said to a salesperson: “Nǐ hǎo,” which means “hello.” The Chinese salesperson immediately assumed I spoke Chinese fluently. She responded to my simple “hello” with a full paragraph of conversation in Chinese. I just stood there with a bewildered look on my face, turned and walked off. I guess I should have learned to follow up “Nǐ hǎo” with a translation of: “I don’t really speak Chinese, but I thought it would be cool to pretend for a second.” In the end, I decided it was better to just smile and never act like I knew any of their language to begin with.

To minimize the culture shock of language, try to travel with people who speak English. In this case, at least you’re in the same boat together. Another good option is to hire an interpreter to travel with you – a good perk for business travel, but usually not practical for personal trips. English probably won’t be their primary language, but they can help you communicate with locals. This helps that hopeless feeling you get when it is impossible to get a point across.

My final comment about language is that most of the world wants to learn English. Instead of trying to speak their language to them, test the water and see if they know any English. I’ve found people who speak English in some unexpected places, like the cashier at a KFC in a train station in Shanghai. 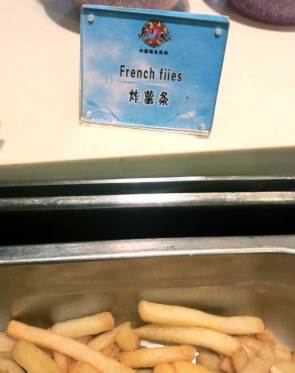 Food
Food is a different challenge everywhere you go. The real issue happens when you almost exclusively eat local dishes that are new to you. Some cultures take it as an insult when you refuse their food, but you need to balance that concern with your well-being.

Sometimes the item you’re eating isn’t as big of a problem as the flavors in it. There is a spice in Asia that makes my stomach roll over when I even get a whiff of it. We walked about 2 miles in Taipei to eat at a specific restaurant, but the smell of that spice filled the air. I felt bad about it, but I told the host I couldn’t eat there. In the end, he was glad I told him because he didn’t want me to hate the experience.

I have two additional tips for minimizing culture shock related to food. First, don’t be afraid to eat at familiar places. McDonald’s, Wendy’s, Pizza Hut, KFC, and other familiar fast food spots are everywhere. They will have some different items on the menu, but will also have familiar items. The great news is that they taste pretty much the same abroad as they do back home.  My second tip is to take some packaged food with you. Grab some Clif Bars, granola bars or something easy to carry that you enjoy. Eating those can save you at a place with no good food options, or just give you that familiar taste to help remind you of home. 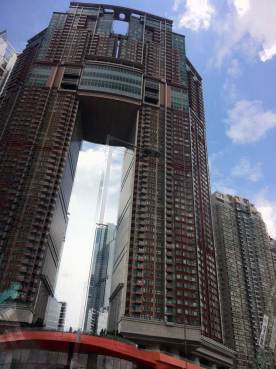 Currency is probably the trickiest element of culture shock. In Canada, I don’t even mess with the exchange rate because it’s close enough to the Dollar. In Mexico, you can pretty much move the decimal one spot to the left and you have the cost in Dollars. Asia is crazy though. The Chinese Yuan is 6.3 to 1 USD. The Macau Patacas is about 8 to 1. The Taiwan Dollar is 29 to 1! Travel back and forth between these countries and you’re head is going to spin.

My client and I were at a casino in Macau playing blackjack. As usual when the table starts streaking, I increase my bet incrementally. At one point we were on a burner. He looked over at me and said, “You know you have about $200 down on this hand, right?” Well, of course I didn’t. I thought I was betting around $50! I was so lost with the exchange rate that I got into it and it got out of control without me knowing. Luckily for me, I won that hand and then reduced my future bets.

To help keep yourself grounded with exchange rates, download an iPhone app, keep a reference note card in your pocket or figure out some other way to keep it straight. Just be sure to relax and take your time. Salespeople will read your confusion and try to put additional pressure on you to hurry. Foreigners know that if you are in a rush and confused, you’re likely to make a mistake that they can benefit from.

Conclusion
Above all, try to approach foreign travel with a sense of adventure. Enjoy the differences, the strange experiences and try to roll with the punches. Language, food and currency are each unlikely to kill you, but if you don’t expect them to affect you, they will. Stay a step ahead of them. 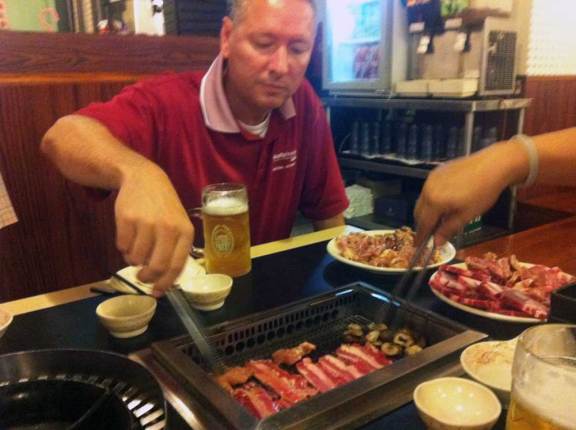 The outstanding grill we ended up at in Taipei after leaving the stink pot.