I traveled to Montreal this year for the first time. Several friends had told me that it was their favorite city in the world, so I decided to take a vacation day and check it out. What I didn’t consider is that my trip was in January and Montreal is freaking cold! Since I was battling negative temperatures, and all of the wonderful patios were closed, I had to search to find a way to truly experience Montreal. In comes poutine.

Let’s face it, poutine sounds like a dirty word no matter how you use it. After tasting it, I might make an argument that it is, but I’ll get to that in a moment. Poutine is basically the provincial dish of Quebec. It contains three simple ingredients: French fries, cheese curds and gravy. It is known as a comfort food, finding its roots in rural Quebec during recessionary times when families couldn’t afford finer ingredients. Today, poutine is available across Canada in small diners, pubs and even fast food restaurants like McDonald’s, A&W and Burger King.

Since I was in Montreal, the heart of poutine country, I decided to give the dish a shot. I tried to order it at Les 3 Brasseurs (The 3 Brewers) pub in old town, but the bar tender talked me out of it. Instead, she recommended a café a few miles away that is known for having the best poutine in Montreal: Resto la Banquise. I accepted her recommendation and made plans to eat lunch there the following day.

When I arrived at Resto la Banquise, I was pleased to find a little café with plenty of charm. I seated myself and was presented with a long, narrow menu. I was blown away by the sheer number of different poutine dishes they offered. There were around 30 options with names like Poutine T-Rex, Poutine Kamikaze, Poutine Dan Dan and Poutine Bacon (which was very tempting.) I honestly didn’t know where to start, so I asked my waitress what she recommended. Her confident answer was the Poutine Elvis, which featured ground beef, green peppers and mushrooms. I confirmed that would work and she put in the order.

When my Poutine Elvis arrived, I was shocked by how it was presented. It looked like a heart attack on a plate (some of the heart attack was actually dripping off of the plate onto the table.) I decided to set my concern aside. After all, poutine is a famous dish for a reason and a lady who works here, at this famous poutine restaurant, says that this is the best they have.

Well…my first bite told a different story. It tasted about like it looked: overly rich, fatty, salty and generally unhealthy. I’m a guy who can live on cheese fries, but the gravy and goo was just too much. I ate as much as I could stomach, then headed down the street for a McDonald’s cheeseburger, which suddenly seemed like health food. 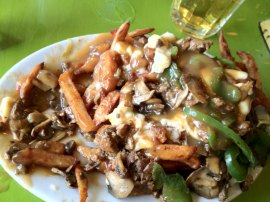 On my next trip to Montreal, I believe I’ll steer clear of the poutine and enjoy dishes that are a little more familiar. If you’re a brave soul, I do recommend Resto la Banquise, as the atmosphere is nice and there are plenty of heart attack options to choose from.

Resto la Banquise from the street

This entry was posted in Food and Dining and tagged cafe, canada, dining, food, grub, montreal, Poutine. Bookmark the permalink.

8 Responses to Poutine: It’s Not a Dirty Word. Well, Maybe.