Take Alcohol to Drink on Your Flight

I was recently tipped off to one of the most unbelievable travel tricks ever. In this day and age of insane security, invasive procedures and removal of freedoms, here’s a bright ray of sunshine. With an unintentional loophole (maybe intentional with some of the drinking habits in Congress), you have the freedom to take the alcohol (or non-alcohol) of your choice on your flight with you.

I first had a discussion with a TSA supervisor about this a couple of months back. My clarifying question was in regards to the 1 qt bag of liquids you are allowed to take through security. The rule is that you can take as many containers that are less than 100ml (~3 oz) each that you can fit in a 1 qt Ziploc style bag. I then specifically asked if alcohol was allowed. The answer was a resounding “Yes!” In fact, he was enthusiastic about it.

To test this, I waited until Amy and I took a recent trip to Vegas. I drove to the Missouri border liquor store, Macadoodles, and purchased ten 50 ml bottles of liquor. Arkansas liquor stores don’t offer the tiny buggers. They were $2.50 each, compared with $7 each on American flights. I decided to fore-go my Listerine and cologne and put some of the bottles in my liquid bag. 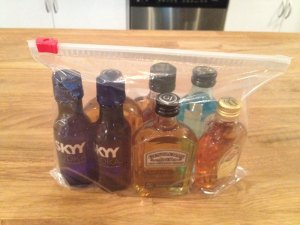 The moment of truth came when I went through the TSA security checkpoint at XNA. I pulled my computer out of my bag, took off my shoes, then reached in and grabbed my 1 qt dream bag. I put it into its own bin, skittishly looked around to see if Tasers we’re being drawn, then moved to the full body scanner. As I walked by the TSA Agent at the scanner, he smiled at me and said, “I like your liquid bag.” I smiled back, more in relief than joy. 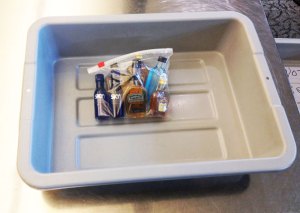 I then moved through the scanner, collected my computer, shoes and mini bottles of fun. I asked another Agent if I could take photos and he gave me permission.

So, there you have it. At least for now, you are allowed to take bottles of alcohol that are 100ml (~3 oz) or less through security, as long as they fit in your 1 qt bag.

TP shared:
http://www.faa.gov/about/office_org/headquarters_offices/ash/ash_programs/hazmat/media/materialscarriedbypassengersandcrew.pdf
This states that unopened retail packaged alcohol is allowed to carry on a plane, though does not address security checkpoints directly.

Kris offered:
http://www.tsa.gov/traveler-information/alcoholic-beverages
This further clarifies that alcohol may be carried through security checkpoints, if it complies with the 3oz liquid regulation.

(1) Appears to be intoxicated;

(c) No certificate holder may allow any person to board any of its aircraft if that person appears to be intoxicated.

(d) Each certificate holder shall, within five days after the incident, report to the Administrator the refusal of any person to comply with paragraph (a) of this section, or of any disturbance caused by a person who appears to be intoxicated aboard any of its aircraft.

The Cabin Safety Subject Index describes itself as: “The Cabin Safety Subject Index (CSSI) is a reference guide to Federal Regulations, FAA Orders, Advisory Circulars, Information for Operators (InFO), Safety Alerts for Operators (SAFO), legal interpretations, and other FAA related content related to cabin safety.” Therefore, the contents are not all “LAW”, as many have tried to claim in the comments. There is also no penalty listed, only requirements for airline staff and operators.

My belief is that it is against most airline policies to consume your own alcohol in-flight. The FAA stipulates to the airlines that they should be the ones to serve customers alcohol so that they can judge the safety risk in doing so. Additionally, it is generally a bad idea to be trashed on a plane.

All this said, TSA allows you to pass through security with alcohol. So, if you’d like to take it through security, mix a drink in the terminal privately or in secret on the plane, you can. Just don’t be stupid or misbehave, and you have a low risk of getting in trouble.

After more than 4 million people have viewed this article, not one has said that they faced charges for this. However, hundreds of people have claimed things as law that are not law.

In the end, just be smart and courteous. It’s a pretty darn good rule for life.

1,115 Responses to Take Alcohol to Drink on Your Flight